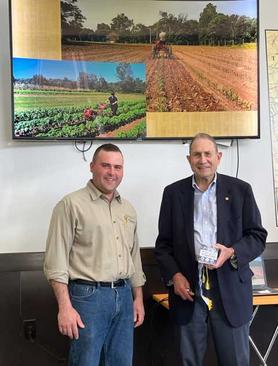 Bryce Cannon joined DelVal in 2016 as the interim manager of the Roth Center for sustainable Agriculture. He enjoys educating aspiring farmers and the surrounding community about organic farming. At Roth, Cannon works with students in DelVal’s Organic Farming Program, a 36-credit certificate program that prepares students to quickly transition to careers in organic agriculture. Cannon has 11 years of experience working in agriculture. His experience ranges from operating a small organic farm to serving as herdsman and farm manager at a 500-plus-acre cattle, sheep, vegetable, and row crop farm. He has helped transition farms from conventional to sustainable practices.

Delaware Valley University and the Roth Center for Sustainable Agriculture

Chair Dick Cuff introduced his grandson-in-law, Bryce Cannon, husband of Dick's granddaughter Amy Cuff Cannon. Bryce and his wife Amy are both graduates of Delaware Valley University, a 570-acre campus in Doylestown, Bucks County, PA, while Bryce runs the 500 Acre Roth Center for Sustainable Agriculture owned by Delaware Valley University. The 500-acre farm itself is in North Wales, Montgomery County, PA, and was donated to Delaware Valley College by the Mrs. Edythe Roth in 1992, whose family had escaped from Nazi Germany in the late 1930's.

Bryce began his outstanding presentation by giving a brief history of Delaware Valley University. After purchasing an abandoned 118-acre farm in Bucks County in 1894, Joseph Krauskopf (1858-1923) received a charter on April 10, 1986, and opened the National Farm School in September 1897 with six students. A Prussian-born reform activist rabbi from Philadelphia with an eye for social justice, Rabbi Krauskopf wanted a place to provide relief for urban Jewish boys and help them understand that "living meant working and creating under the open sky” -- although the National Farm School was open to young men of all religions and backgrounds.

The motto of the school was “Science through Practice," or "Science with Practice." In 1948, the National Farm School was renamed the National Agricultural College, and in 1960, it became Delaware Valley College of Science and Agriculture, and in 1969 it began accepting women. In 1989, it was renamed Delaware Valley College, and in1998 it entered the field of graduate education, finally receiving approval from the Pennsylvania Department of Education in December 2014 to become a university, Delaware Valley University currently has more than 2000 undergraduate and graduate students on 1,100 acres across three locations, of which the 500-acre Roth Center for Sustainable Agriculture in North Wales, Montgomery County, PA, is one of those three. Delaware Valley University has a reputation for personalized education and hands-on experience.

Bryce noted that Agriculture is a huge industry, the biggest industry in Pennsylvania, as well as in New Jersey. Currently, there is a shortage of fertilizers and chemicals, which is no surprise since Ukraine (currently at war with Russia) is a major producer. Sustainable agriculture, on the other hand, does not use chemicals and fertilizers which are based on fossil fuels, and tries to work with nature. In essence, Sustainable Agriculture is a fresh innovation on an old way of life.

In Sustainable Agriculture, Farming Practices are Based on Three Principles:

Bryce cited some environmental and social concerns involved in the use of chemicals and fertilizers:  Roundup, the most widely used pesticide, developed in the 1970's, is known to cause non-Hodgkin’s lymphoma, with a class action suit against the manufacturers; use of fertilizers upstream leaching into the Chesapeake Bay; farming practices which helped create the "Dust Bowl" of the 1930's, spotlighted in John Steinbeck's classic work, The Grapes of Wrath. In the 1800's, the fertile plains of the Midwest had three feet of topsoil, while today, the level is only one foot. Bryce said that while topsoil can be replaced, it takes 100 years just to replace one inch of topsoil.

At the Roth Center for Sustainable Agriculture, the animals are fed a grass diet, instead of grain. The grazing cattle are followed by goats, which enjoy the stickier greenery and thus add to the bottom line. Rather than raising chickens in a shed, the center has a mobile chicken coop protected against predators by donkeys, which dislike canine creatures. With the cow's and cattle's manure, the farm can save on money for fertilizer and the manure helps the grass to grow. Produce is grown organically. Cutting down on the use of running equipment contributes to this holistic approach to agriculture, which is a return to Farming Nature's Way, that is, trying to mimic nature's growing cycle.

While nationwide today, only 1% of the population is involved in agriculture, Bryce went on to say that today, 65% of the people entering the "field" of agriculture are women, who have not been involved in agriculture previously. Some of these women are looking for a career change. Some people learn practical life skills, such as building and repairing things, learning about modern horse farming and working with donkeys, which teach people patience and kindness, as donkeys do not respond to whipping.

The produce grown at the Roth Center for Sustainable Agriculture is available from June to October, 12 PM to 7 PM at the Roth Farm Market roadside stand, located on Hancock Road and Route 202.